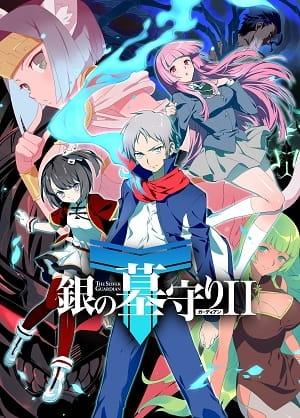 
Synopsis:
At Shinryou Private Academy—an expensive school for wealthy students—one would never expect to find the poverty-stricken Suigin Riku. When he is not working on one of his many part-time jobs to pay his tuition, he can often be found playing the RPG game Dungeon Century, where he has cultivated a relationship with an online friend. However, when Dungeon Century shuts down, he finds out that his crush, the kind-hearted Rei Riku, and his online friend are the same person.

But in the aftermath of this revelation, Rei gets kidnapped and taken into Grave Buster, which is a new online game from the creators of Dungeon Century, forcing Suigin to enter the harsh new world of a pay-to-win game in order to save her. Gin no Guardian 2nd Season continues Suigin's quest to rescue Rei, while attempting to solve the mysteries of this strange game.