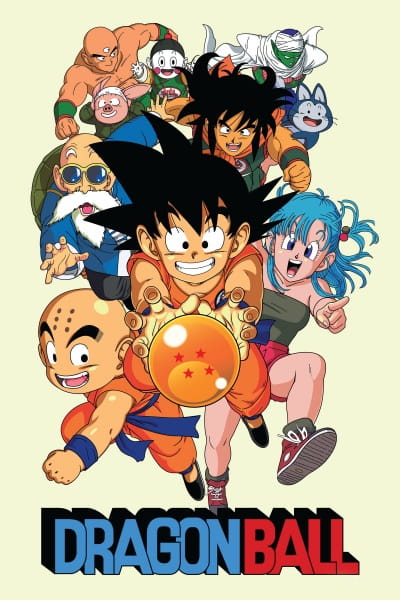 
Synopsis:
Gokuu Son is a young boy who lives in the woods all alone—that is, until a girl named Bulma runs into him in her search for a set of magical objects called the "Dragon Balls." Since the artifacts are said to grant one wish to whoever collects all seven, Bulma hopes to gather them and wish for a perfect boyfriend. Gokuu happens to be in possession of a dragon ball, but unfortunately for Bulma, he refuses to part ways with it, so she makes him a deal: he can tag along on her journey if he lets her borrow the dragon ball's power. With that, the two set off on the journey of a lifetime.

They don't go on the journey alone. On the way, they meet the old Muten-Roshi and wannabe disciple Kuririn, with whom Gokuu trains to become a stronger martial artist for the upcoming World Martial Arts Tournament. However, it's not all fun and games; the ability to make any wish come true is a powerful one, and there are others who would do much worse than just wishing for a boyfriend. To stop those who would try to abuse the legendary power, they train to become stronger fighters, using their newfound strength to help the people around them along the way.